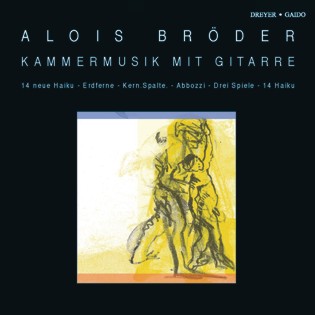 Alois Bröder is a composer who knows how to bring together intellect and belly in his works. He writes pieces which have to be comprehended well for the open-minded listener. As a trained guitarist he has a faible for this instrument whose possibilities he exhausts. He revives the song accompanied with guitar (in the 19th century often usually), possibly in his both haiku cycles which were recorded with the soprano Eva Lebherz-Valentin, the baritone Martin Hummel and Christopher Brandt and published together with other works as Chamber Music with Guitar.  Bröder writes fascinatingly for the respective instruments. The haiku songs are vocal in the disposition and also follow the meaning of the texts. The sounding of the instrumental music is enjoyed thoroughly in an ingenious way, and absorbing connections originate, possibly in the Abbozzi for guitar and piano, whereby the listener is astonished that both instruments fit so well. Similar happens in Drei Spiele for guitar, baritone saxophone and cello.
Heinz Zietsch  (in: Darmstädter Echo, 23.07.2008)