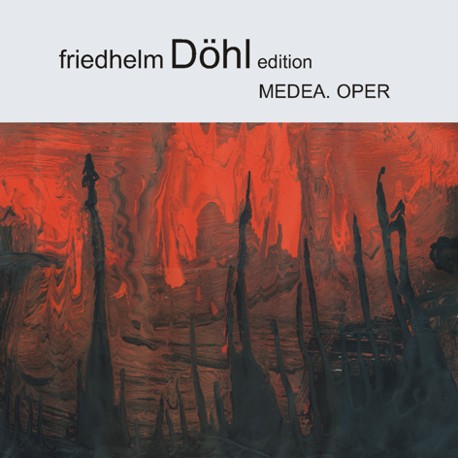 Unfortunately there is no professional studio recording of Döhl’s ‘Medea’. This CD documentation is based on an in-house live recording of the premiere - which fortunately still exists - with all the acoustic disadvantages which this brings with it - such as audience coughs and noises from the stage, which result from the somewhat unmusical stage direction. On the other hand the live recording reflects some of the musical freshness and directness of the premiere, as Klauspeter Seibel, the conductor of the premiere - whom Döhl asked for his opinion (some 20 years later) - explicitly confirmed. This approbation by the conductor was important for the composer as it was one of his central works, or better, the central work; the culmination of much that had preceded it, and from which much of what followed was developed. The live recording which documents the world premiere on 17th June 1990 can therefore, despite all the mentioned acoustic shortcomings, not be left out of the ‘Edition Friedhelm Döhl’.

"Today I finally had the chance to listen to the whole of ‘Medea’. I have just finished listening to it, and to say that I am intensely impressed by the piece, as well as the performance, is an understatement… Most of all I am astounded by the orchestra, because there is so much to be heard on the recording: colouring, atmosphere, dynamics, bravura etc. A lot of it sounds really good and I think we understood the music quite well at the time. It was very pleasing for me to be able to listen to it once again. I am very happy to give my permission for its publication. As you have mentioned, one has to emphasize that it is a live recording; but that is somehow also part of the live atmosphere."
Klauspeter Seibel in a letter to Friedhelm Döhl